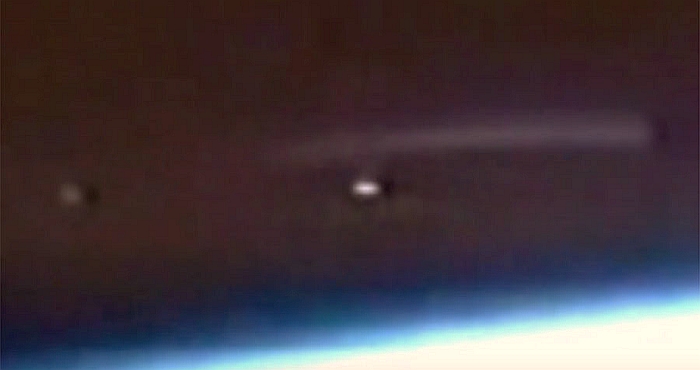 There have been conspiracies and stories surrounding the UFO phenomenon for so many years that few people give the idea any real thought anymore. People are use to hearing about them and those that believe they actually exist are vehement in their beliefs, as are those who think they are express hoaxes. Many believe they are put in place to take the eyes of the population off real news stories, shifting their attention away on purpose.

However, those who do not believe will never dim the excitement of those that do.

For instance, video has been uncovered very recently from NASA’s own International Space Station feed that has a great many UFO believers quite excited. The video seems to depict a UFO that is cigar shaped hovering above Earth with two other objects in plain sight, just below the large ship.

YouTube enthusiasts have become very intrigued with the idea that a brand new UFO sighting has occurred, but the opposite side of the spectrum sees hoax busters already attempting to debunk the scenario.

The footage clearly shows what the enthusiasts claim, but just prior to the end of the footage, the UFO simply vanishes. Streetcap1 was the YouTuber who spotted it at the beginning of March and since then, many UFO fanatics have grabbed the story and run with it.

The owner of a conspiracy site known as SecureTeam 10 has been quoted as saying that this particular occurrence is nothing like any of the thousands of other things he has seen while reviewing ISS live stream pictures. He goes on to explain that the objects that have garnered so much attention quickly dim out and disappear and says that this could be due to many things. One theory is that the UFO itself decides to cover its visibility, while another is that NASA changes the contract and exposure of the video feed to make it disappear from view.

With nearly a quarter of a million views on YouTube, for some people, seeing is not believing. They reckon that what you are seeing is a satellite that is no longer useful or possibly even space debris that has been left to float in space. Others still believe wholeheartedly that the picture shows a distorted airplane.

While this has been the second time in recent months that NASA has been said to alter video footage, another UFO hunter believes he has the answer: that nothing human could possibly fly that high.