NASA to Aid Colonization of Mars by Humans

NASA to Aid Colonization of Mars by Humans 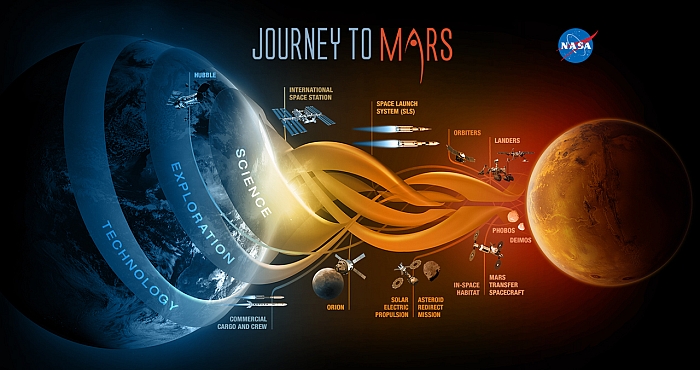 Mars has long been thought to be a future home of humans, as has been seen in science fiction movies for many years. In fact, the thought of life on Mars is where the term “Martians” came from. While the idea has primarily been considered strictly a form of scientific wishful thinking all these years, NASA has recently made a bold move to advance the idea.

A recent announcement from NASA states their plan to utilize an oversized magnet that would completely transform Mars’ atmosphere, thereby making it possible for human life to gather there. A NASA spokesperson said that an artificial magnetosphere would be put in place to keep the sun’s radiation at bay so as not to harm the planet.

To our understanding, about three billion years ago, the atmosphere of Mars was completely stripped by radiation from the sun, thus transforming it into a vast planet of nothing but desert. Dry, barren and likely without water, Mars is about fifty million miles from planet Earth, according to a recent picture secured by the Hubble Telescope by NASA last year.

NASA’s plan includes the placement of a structure that is completely inflatable into an orbit that is directly between Mars and the sun. The belief is that with the lack of solar radiation, Mars’ atmosphere would be rejuvenated to a previous, habitable state. It is thought that greenhouse effect would take place and eventually warm the planet up, making it a useful land for humans and animals.

It is a desire of some to completely take the entire solar system, as they believe that it belongs to us, and it is our right to have it. The supporters of this line of thought cite humanity’s desperate need for a better and more sustainable environment as reasoning to support this theory.

The thought is that since the planet is not actually being terraformed, that nature will go ahead and do what it normally does by our own laws of physics. They state that a gradual climate change over the course of time will reinstate Mars to a livable atmosphere that will not only support human life, but also give humanity another place to call home.

There have been other ideas floating around in the past about how to protect humans from the sun’s radiation in attempting to live on Mars. One of those was the idea of a reflective vest. This idea, however, was thrown off as it was realized that it would restrict movement far too much, thereby restricting mobility as well.