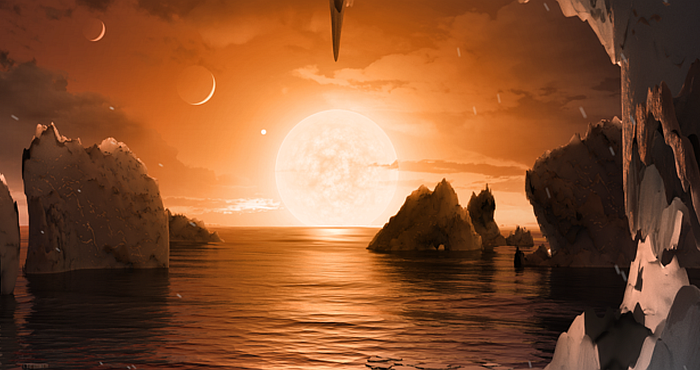 While there is still yet much investigating to be done, a new solar system has been found recently by astronomers that have a total of seven planets that are roughly the same size as Earth. This system has a centralized star that has been called TRAPPIST-1, and the three planets closest to the star could possibly be inhabitable.

TRAPPIST-1 is about the size of our own planet Jupiter and is not nearly as hot as our sun. It resides in what we know as the constellation Aquarius, and its distance from Earth is approximately thirty-nine light years.

The three planets that could possibly be inhabited are thought to have oceans of water on their surface, as has already been reported in the media. At present, they are looking into a possible seventh planet that they think resides in the farthest reaches of the new galaxy.

In order to figure out the mass, they had to closely look at how all six planets pulled against one another. Upon determining an estimated density, they also concluded that six of the planets are also as rocky as Earth is.

While scientists do believe that some conditions on these new planets would allow people to live there, there is yet another discovery that could mean just the opposite. Thanks to the way that these planet spin in their orbits, it appears that they each have one side that constantly faces the star and one side that does not.

What this means is that these planets have one side that is perpetual day, and one side that is perpetual night. While you might be thinking “land of the midnight sun” in this instance, that is not the case at all. It actually means that the day side could very likely be too hot for human habitation, while the night side would be far too cold for anyone to actually live there.

Still, three of the planets seem to maintain a “Goldilocks” zone, purported to be neither too hot nor cold to support life as we know it.