3 Amazing Things you should know about the TRAPPIST-1 System

3 Amazing Things you should know about the TRAPPIST-1 System 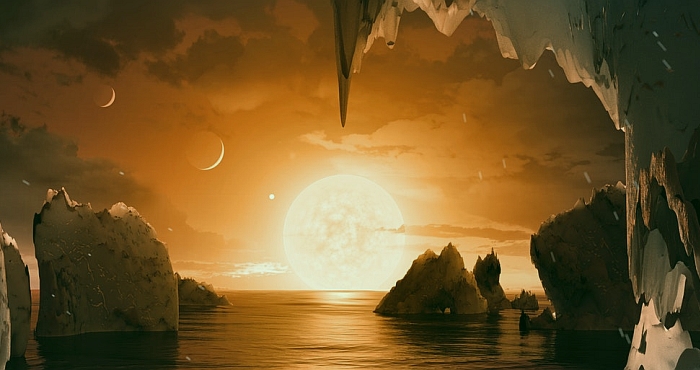 The Astronomers announced on Wednesday, 22/2/2017 that another solar system with seven (7) rocky, Earth-like planets that revolves around TRAPPIST-1 (a dwarf star) has been discovered. However, this has been a major breakthrough in search of aliens.

For this reason, this article is written to let us know some of the latest discoveries and traits of the recently discovered planet and these are:

It has been discovered that at least three of the seven newly discovered planets could support life because they are located in the temperate zone and this means they receive the same heat from their sun as we do from ours. This means water could exist on their surface.

According to Dr. Copperwheat Chris, a British astronomer from John Moores University, Liverpool, He said, the planets discovered have surface temperatures that show evidence for the existence of water. Therefore, the scientist should be able to discover evidence of life on the planet soon.

TRAPPIST-1 is in infancy

TRAPPIST-1 is the source of light for the newly discovered planets (as the sun is to our planet) and they revolve around it. According to the articles attached to the discovery, which was written by Ignas AG Snellen (a co-researcher from Leiden Observatory), It stated that the TRAPPIST-ONE is in it early stage and this has made it burn hydrogen so slowly that it will still exist for about 10 trillion years (700 times more than the existence of the universe).

It is recorded that TRAPPIST-1 is so young that even when our solar system is destroyed it will still be in developing stage.

The newly discovered solar system is estimated to be 39 light years away from our solar system, which means it will take around two centuries (200 years) to get there if we are to travel to the solar system. It is discovered that all the seven (7) planets move closer to their sun (TRAPPIST-1) more than Mercury (the first planet in our solar system) is to the Sun. Moreover, the planets are tidally locked together which means they are of the same size and mass and that one side of the planets will always face the sun and witness eternal daylight while the other side will be in total darkness.

However, it will be interesting to know more about them and to find out there is life elsewhere apart from our solar system.